Playing With The Big Boys “LIVE” – The Shirley Peterson CD…. 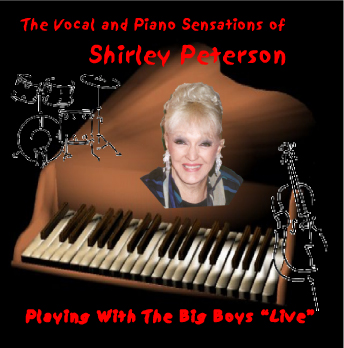 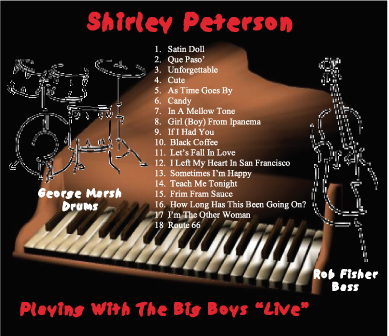 Produced by Shirley Peterson, Recorded in the presence of a live audience.

Recorded, mixed and master at: MESA Recording Studios Sebastopole, California; recorded, engineered and mastered by Jim Stern. Cover designs by Adam and Ron Roberts, with special thanks to Peter Welker for making this recording possible.

“Shirley’s sophisticated Piano and Vocal styling of Classic Standards and Jazz tunes, evoked considerable smiles and toe tapping.” Her easy going manner charmed people wherever she played.  ‘Mizz’ Peterson’s books draw on her life experiences and travels as a professional musician and vocalist.

Shirley Peterson entertained in cities across the United States, Mexico and Greenland. From New York City to the San Francisco Bay Area, from Denver and Aspen to Chicago, Boston, Baton Rouge. In Florida she worked in Ft. Lauderdale, Miami, Orlando and at several venues along the Space Coast — in Mexico, from San Miguel de Allende to San Carlos, and in the frozen Arctic of Thule Air Base, Greenland – located just a snowball’s throw from the North Pole! Shirley informed me that the only reason she recorded this CD was because she “wanted to”! Well, that was Shirley and we are grateful that she did….  So “hear” it is.  Dig it!

CD IS AVAILABLE FOR FREE DOWNLOADING