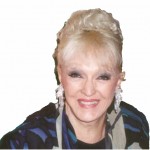 “Mizz” Shirley Peterson was born in Cheyenne, Wyoming in 1928, where classical piano lessons, calf roping and country western music were a big part of her life.  Shirley joined the Cheyenne high school ‘dance band’ in her senior year and discovered playing ‘swing’ with the boys was much more fun than dancing the “Cotton Eyed Joe” and playing in piano recitals.

When the United States entered the ‘second world war’, Shirley became the sole remaining musician of the high school band.  To the disappointment of her family, who were “rodeo people” Shirley moved to the east coast of the United States.  Once enrolled in George Washington University in Washington, DC, she once again became the only female member of the university’s fourteen-piece dance band. The ‘boys in the band’ took her to ‘after hours’ clubs and ‘jam sessions’, exposing her to jazz and the musical freedom that jazz inspired.  After three years of studying political science and languages, Shirley married a jazz ‘tenor saxophone’ player and moved to Boston, Massachusetts where she studied ‘jazz piano’ and worked for agents who booked her on jobs which required her to sing and play just about every popular and standard song of those years, and to play “commercial” style piano.

Playing for ‘nightclub acts’ in a band with her husband, she was required to accompany male and female singers, strippers, magicians, exotic dancers, tap dancers and comedians.  Her musical ability expanded and her knowledge of ‘show business’ increased immeasurably.  After her husband’s untimely death, Shirley continued to perform alone, as a single performer, playing and singing at ‘piano bars’ and in cocktail lounges, which became popular during the nineteen-sixties and seventies.

Working through New York booking agencies, Shirley traversed the United States and finally retired in Mexico where she lived for several years.  While living in Mexico, Senora Shirley began to play piano again with young invigorated Mexican musicians eager to learn and play jazz.  She recorded her first CD, ever, while visiting musician friends in northern California in May of 2003.  She was persuaded by the younger generation of musicians to “go for it” and record a CD.  After discussing the choice of songs for the recording project, with her musician friends, it was decided she should record the Classic Standard and Jazz songs she grew up with musically… over the years.  That is not to say that “Mizz” Peterson didn’t play the more modern, challenging compositions as well.  As a result of years of playing various piano styles, Shirley most enjoyed playing what she called “Waldorf Astoria Jazz”, a mixture of ‘free and easy’, swinging piano jazz.  She continued to play… just about up to the time she passed away in 2008.

Early in 2002, and after several years of losing tract of Mizz Peterson, I had the great pleasure of bumping into Shirley, so to speak, on-line via e-mail.  At that time she was still living and working in Mexico, however, within a year or so she relocated back to the United States. The resulting “aftershocks” from the 9/11/2001 disaster greatly effected the tourist trade, which up until then helped support her Mexican musical activities.

When I first quizzed Shirley about ‘her happenings’ she said she was writing a book….  I offered my assistance….  She accepted….  The net results are now available and finalized in the form of two books, presented here – The Comisario’s Band and The Thule Girls.